by doremom
in Tools, Games
0

The Sandbox is a Metaverse game based on the Ethereum platform. Users on the Sandbox platform will create a variety of NFT assets. Therefore, Sandbox game helps players have more new experiences and earn money from the content they have created.

A further vision into the future of Sandbox is to bring blockchain technology to the gaming sector. This will contribute to attracting a large number of users with a passion for cryptocurrencies and games. They offer many perks such as ownership rights, rare digital assets or the ability to generate profits in the future.

As mentioned, the decentralized virtual reality platform (Metaverse) is built on blockchain and systems that support augmented reality such as VR glasses. In addition, there are other tools that help users get an enjoyable experience that is equally authentic.

What problem will the Sandbox solve for Blockchain?

The uneven distribution of value among the parties is the main problem that Sandbox poses. Currently, the game market is owned by major game publishers. They take control of the commodity transactions in the market that limit the creativity of the players.

Additionally, controls over player-generated content are limited. The content on the Sandbox game is quite easy to copy and in this case it is difficult to prove the user’s creative right.

Having grasped the above problems, Sandbox proposed the main solution to create a game platform on the Ethereum Blockchain . This makes it possible for users to create, share, participate in play, collect and perform transactions without falling under control from the game publisher.

In addition, players have a safe and guaranteed copyright for earning SAND cryptocurrency. They are securely established using the NFT Token. In particular, the items in the game will be given an identifier on the Ethereum blockchain platform.

Sandbox is a Game ecosystem for Players and Creators, consisting of 3 main components:

This is software to create ASSETS voxels (Standard ERC-1155), then have the opportunity to become a Non-Variable Token (NFT) and will be posted to the Marketplace system.

VoxEdit to create NFT on The Sandbox

This is a decentralized marketplace where users can trade ASSETS in the VoxEdit game. 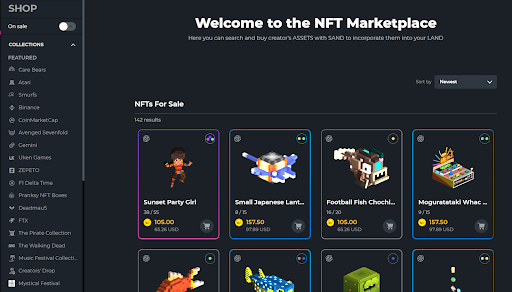 This is the part that allows users to freely create their own virtual world (Metaverse). Players will also enjoy and share more experiences while playing the game. In this game, players have the right to make profits by ways such as resources, tokens, rewards.

The ASSETS in the Sandbox game are items that you can create and create (like vehicles, vehicles, dragons, …) and LAND is the land you live on.
Each LAND will have a set of pre-built terrains, but you can also change the defaults and modify the PLayers. In the near future, players will be able to combine LANDs, to create ESTATES, DISTRICT.

Application of LAND in The Sandbox

Avatar is a character avatar in Sandbox Game, You are allowed to Build and build character images with Equipment (ASSETS). SAND allows you to build better looking Avatars.

How to use a MicroSD as internal storage on your smartphone

No Result
View All Result